When the Horse is Dead, Dismount! 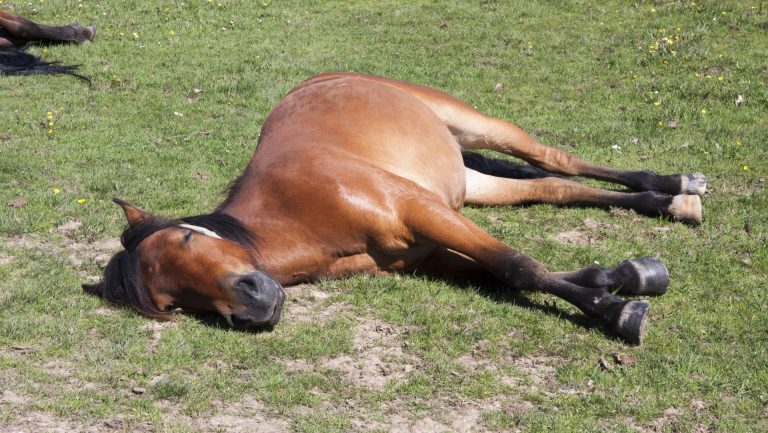 Picture that for a moment if you will. You’re sitting on a strong and beautiful mare and it dies. Just like that. (The horse in the picture is not dead, by the way. Only sleeping, so calm down.) Some sort of medical condition you had no idea about. I think that would definitely be a good time to get off that mare. I wouldn’t want to sit on a dead horse or any other animal for that matter. Now, I’ve only been on a horse twice that I can remember, and dismounting was the most difficult part for me, dead or not. I think the harder thing is knowing if the horse is truly dead. In movies, you’ve no doubt seen horses lying down as still as a sleeping baby in their stalls and barely breathing, and then suddenly, out of nowhere, they stand at attention and are ready for a gallop. It’s a rather shocking phenomenon to witness, I’m told. But when do you know, beyond a shadow of a doubt if the horse is dead? Of course, I’m not going to continue rambling on about horses when I obviously know little about them, but the picture of the dead horse is what comes to mind when I contemplate letting go of something or someone, of giving up my fight, or of throwing in the towel. When is it time to do that? Or should we never give up hope? Maybe we talk to other people who ride dead horses and ask for advise. Should we try moving our dead horse to a new location? Maybe we just need a better bridle. You get the idea.

Maybe your children won’t stop dating the wrong people. Perhaps you’re single and you’ve been hoping and praying for a mate, but that person just doesn’t seem to exist. Maybe you’re married and you’ve been hoping and praying that your spouse will give up his or her addiction, but he or she continues to relapse. Or maybe you’re in a relationship and the other person doesn’t want to get married. Maybe your desire is to start your own business, but you can’t get a loan to save your life. When is it time to move on? When is it time to give up the fight? To throw in the towel? To let it go? I’m quite sure it all depends on your resolve and how much you want something or someone. How much of your life do you want to invest in that business? In that marriage? In that job? In that relationship? When is enough, enough? Only you can answer these questions, my friend. But I think you already know the answers. Jesus says in